Gontaper is one of the Seven Servers of SP. He's short, light blue, and round. He was Octopus58's first creature that assisted him in the creation of the SP World.

He has many different houses in different regions of SP, but his main home is located in Hex City, near southern park. It appears as cube shaped (as most houses in the city appear to be) and white. He lives there with his wife, Gonaper, and his two sons, Gredap and Yelt. His fathers name is Yara, and his mother is Sera.

Gontaper has a very excited and daring attitude. He is also one of the most convincing/persuasive creatures in SP.

He is most often seen with his family going to trips to swim in the Zelosian Ocean and to many different areas on Earth.

Gontaper is a round creature that has two humps on the top of his body. He has limbs that are not attached to his body by skin/flesh, but rather he controls them with his heart. He is hollow inside, as the space inside of him is infinite. His mouth and eyes send all senses to the heart. Even though he does not have a nose or ears, he can still hear and smell with psychic abilities. Like any other creature in SP, his heart makes him immortal and he can also morph into anything he wants, however the default shape is the one he is seen in 99% of the time.

Like any creature in SP, Gontaper has the option to use any ability or power. However, as a preference, he likes using water and heat. When fighting, he often uses scalding water in his attacks.

Gontaper has many different forms that each have a specific role to execute a certain action. 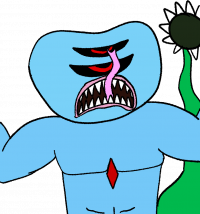 Gontaper is often occupied as a researcher and an astronomer. He has studied multiple things over the years.

Infinity cores are objects found in SP, mostly growing on Void Tree. Gontaper has researched their function and has contributed the fact that most cores attribute to some special function. Some provide immense power in things such as transformation (such as the cores Bever utilizes), magic and abilities, and potentially more. The versatility of the cores and what they do however, or how they work, is still unknown. Gontaper also noted that the cores power goes toward infinity at different rates. In conclusion, he has found that some infinity cores are less powerful than others, but ultimately, each core spikes to a rate of infinity at some kind of rate.

Since SP cannot be conceived as a simple spherical planet object, Gontaper is determined to figure out more of how it works. Since space is infinite inside of SP, Gontaper wanted to determine where exactly the barrier to SP is from the ground, and the conclusion was slightly complicated. Gontaper stated that the barrier only opens in correspondence to a signal that comes from within an SP Heart, meaning that there is no fixed height to where the barrier is, but rather just a specific function to leave SP. However, the barrier of SP from the outside stays fixed in relation to the current diameter of the planet.

The SP Heart study is very complicated as, while most creatures with these hearts are straight forward, half human creatures have difficulty as they can't fully be in SP without also being in their home location at the same time (E.g., Earth). While this study has went on for a long time and brought back little results, Gontaper has concluded that using any of their powers to see anything outside of SP, or gain any kind of knowledge that a half human cannot obtain, they'd go off sync with the half human causing them to bounce back and retract that knowledge. For example, if Gontaper is talking to M.O.G. on Earth, he can't tell him what's going to happen in the next minute using foresight as that would throw them off sync.