Guppy's Quest is a 2D platform game in MGFlow58's SP series. The player gets to choose from a variety of characters with different abilities to play as while going through an altered SP past created by the main antagonist, Kosmotvar. Each stage has different environments or obstacles to overcome, and each character has their own unique moveset and abilities.

The game is aimed to release by 2022 on the Unity Engine (previously built on a Java engine) for Windows, Linux, OSX, and potentially planned for the Nintendo Switch. It has been in development from late 2013, started by Octopus58, and eventually in 2018 joined by Rosemaryy. Octopus58 currently works on the game plan, programming, and composing while Rosemaryy is also working on the game plan, and all art assets from previous SP character and stage designs.

The aim of the game is to make players feel a lot of choice and variety within a platformer. With multiple game modes, and many versatile characters, the game aims to feel different with every turn and corner, with every creature you play as, and with every secret you unlock. Development is currently tough, but efforts are being made to finish this game by 2022.

The game features many characters that are unlocked from the start.

Then there are first party characters you are able to unlock:

There are a few guest appearances in Guppy's Quest. All guests have to be unlocked first.

Some characters can be unlocked as easter eggs. Spoilers below!

Story mode can be played with up to four players. After selecting a character, you are brought to the world map where you can play currently unlocked stages. Every stage has at least one boss, and usually a linked "sub" stage respectively. Sub stages are stages that, unlike main stages, have to be unlocked with some special requirement, most of the time being from the main stage itself.

Beating all the main stages and their bosses will give you a different ending opposed to beating all the main and sub stages. However, the third ending is unlocked with more requirements. Collectibles throughout the stages (mostly Time Shards) allow you to buy things in the store.

Once the true final ending is finished, the stadium mode can be purchased from the store where you can you can fight all the final bosses in the game with this boss rush mode. In Easy mode, you fight all the bosses as you've seen them, in Hard mode you fight the same bosses but slightly harder with different skins, and in Insane mode the bosses are buffed even further with a surprise towards the end.

Pages are another collectible in the game. Every unlocked page goes into the Lorebook, where you can view all your other pages. They contain information on a specific topic that you can read, but they serve no fundamental purpose in the game other than finding out more knowledge of the lore.

The jukebox is a mode that can be bought and unlocked from the store. It's a simple mode that allows you to listen to different tracks from the game.

The store allows you to buy things with Time Shards. These items include:

The game takes place shortly after the P.O.D. Invasion begins. At this time, M.O.G. was facing a lot of difficulty with problems on his planet, Earth. The negativity and pressure of being around certain people was getting too great to bear, so he isolated himself from those who hurt him. However, the hurtful thoughts of what they have done would still linger, causing him to physically manifest his thoughts and cast them out into space, so he could fight them as one. This soulless, angry, negative energy that was cast out was manifested into an entity called Kosmotvar, as the feelings were so powerful and draining they dragged local matter from the far reaches of space to become a hideous, large beast with no soul or life. Since this entity had nothing to do with SP, and had no part in it, Kosmotvar could not pass through the barrier to get into SP. However, he started to orbit near the area of SP, and near Cloud. At this point of time, Cloud was weakened due to him still having a big weakness to draining negative emotions, and Kosmotvar planned to breach into his core to create more powerful enemies that can pass the barrier to cause distress in SP. Knowing that he was responsible, M.O.G. fought him and destroyed him. However, even though everything seemed like it was done with, a concerning discovery was made.

Kosmotvar's hate was so powerful, he manifested himself into an alternate past, where he exploited the cloud to create a disfigured, alternate SP world, with creatures from the past and creatures that would have been in the future (using the core of Cloud from the past when it was weaker). That way, he was also able to clone himself into seven instances and spread out in that alternate past. The most powerful instance he has made, is Chronotvar

The game's story takes a look at everything from Guppy's perspective. Since he was sent to the alternate past, every familiar area was disfigured and not how he remembered it, but the locations of all the areas stayed the same. All the areas would be filled with enemies that Chronotvar (I) placed as obstacles, and would actively be cloned from various creatures from different periods of time. Once Guppy would knock an enemy out, it would be sent back to the time it came from, but with new memories to remember. Boss enemies, before leaving, would guide Guppy on what he should do next before vanishing with their memories flooding to their present selves.

Guppy must go through all the areas to fight Chronotvar (I) in the alternate past, defeat him, and allow the battle in the present to be won. However, achieving certain requirements in the game would allow you to fight Gavnell (II) as a true final boss after Chronotvar (I)

Development ideas started as early as 2013, but the game has actually started development in 2014. 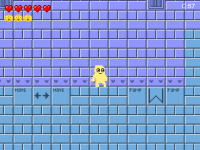 The game started out with no intentions of being a full game, but rather a tutorial to be followed on how to make a simple Java game. However, after seeing some potential in the built program, main developer Octopus58 decided to attempt to make it into a full game. At first, the biggest difficulties were spriting characters and backgrounds. Music also sounded harsh, and at the time was over 0 dB in balancing. As seen in the Beta004 screenshot, Guppy appears to be very jagged, and Squared Palace (at the time, water temple) had no background/foreground contrast at all, making it a pain to look at.

Through early criticism by close friends, especially Ryan McKay, the game slowly started to get better contrast in graphics, however, there were still many issues. Issues that would be considered to be resolved were the following:

The controls throughout the whole Java phase, by default, were arrow keys to move (and up to aim for certain attacks), R for a short range side attack, F for a charge/special move (later seen in final java phase), E to run (while being held), and W to jump. Later, an option would be added to change to arrow key movement controls.

A lot of improvements were made over the years, however, it was a very slow process.

First, more characters have began to be added, mainly Gontaper. This came along with slight sprite updates for Guppy as well. A better functioning menu was added with a character select, which eventually also allowed you to pick alternate skins for your characters by pressing the space button to cycle through 8 additional skins. With more characters also came guest characters such as Captain Viridian, Pico, McPixel, and more.

Using a lot of feedback from Ryan McKay, the levels got more improvements in terms of design, and fluidity. Obstacles were attempted to be made more interesting and less bland, but issues still persisted in levels such as sunset hill, where platforming was not difficult but somewhat annoying, with areas such as a rising hill with enemies on it.

Music improved with slightly more balancing but still had some issues. It utilized more instruments, and some different rhythms compared to previous versions of songs, and had improved looping points. However there was not much else besides that.

Enemies were a bit more diverse as well, doing more specific movements, but all were still essentially based on three basic enemy types. Moving sideways, moving in the air, and jumping from the ground while shooting. The more "varied" enemies were mixes of the three to some degree.

The Java phase had to come to a conclusion on Beta386 (385 was last major Beta, 386 removed some temporarily restricted assets) for multiple reasons.

After a lengthy pause in development (a few months), experimentation has began to remake the games engine in Unity. A lot of time was used up to figure out Unity basics for 2D, but after a few months some public developments have been coming out. The first beta that was released on Steam was known as Beta400.

With the new phase, a lot of changes have started to take effect. Almost the whole game got renovated, which is why little to almost none of the existing assets were reused. Guppy's Quest got a new artist, Rosemaryy, that started to redraw all tiles and sprites in her own artistic style. The main difference was the quality of the animations were much better than the previous ones, and the tiles have gotten more shading, details, and so on.

The music has also been completely reworked, starting from the track "The Depths". The music was being made in no particular order, and is to this day organized simply by composure date in the official soundtrack. Like with the art, the soundtrack was reworked purely for an update in quality. The instruments used, the styles, and other smaller factors all changed to create an overall better and more fitting soundtrack. One of the new key things about the soundtrack is that the styles of each song were made to fit their level specifically, and not just all "video game" or chip-tune style. For example, the Secret Aquarium stage uses an Italodance/Italodisco style track, while an area like Zelosian Depths uses a more calming, ambient track.

The gameplay has been heavily altered to fit the lore more. The game, while used to take place in the Corruption Crisis, now took place in the Kosmotvar Crisis to fit more possibility to the game and have it up to date with more recent SP events. The main antagonist changed from Corren to Kosmotvar (or more specifically, Chronotvar), which is a character Guppy actually had to fight in SP history, making the gameplay more relevant. The stages were also rearranged in the order of the location on the map, going down and clockwise around Hex City starting from Squared Palace.

The music in the game is composed by Octopus58. The style is aimed to be different from song to song to create a certain feel for the area