Difference between revisions of "Alaper"

Alaper is warm and fluffy, with blue fur. She has two ears and sharp claws coming out from her detached hands and feet. She has thick white fur covering her face, and occasionally wears a bowtie. She is hollow inside, as the space inside of her is infinite (with his heart in the middle). Her mouth and eyes send all senses to the heart. Even though she does not have a nose or ears, she can still hear and smell with psychic abilities. Like any other creature in SP, her heart makes her immortal and he can also morph into anything she wants, however the default shape is the one she is seen in 99% of the time. 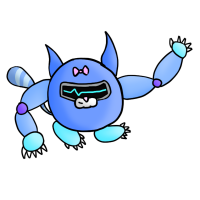