Super Gear Quest is a Metroidvania game released in 2020 developed by FelixBlobDev and published by Blob Games. The player controls an Kewtian android character, Starter Favson, and aims to find out where he is and his purpose after waking up from a long sleep. 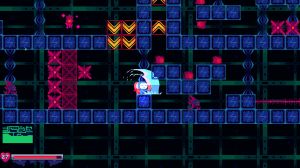 M01 and F01 fighting off viruses inside Starter

The game is the first to feature Starter Favson, the character you play for the game. You can move in a 2D environment and start out with low health, energy recharge, and small jump height. Talking to non playable characters throughout the game helps you learn more about the world Starter is in, as well as receive quests and mission details.

The world this game takes place in, Tanrega, is largely accessible to the player. Starting out underground in the Factorium, you can continue to the outside world to meet more characters and receive more information on your whereabouts and what you're here for. In your arsenal you start out with one simple gun, however you can proceed to obtain more weapons as well as weapon, health and energy upgrades. You also are able to get advanced air dashing and other body upgrades later throughout the game.

Aside from doing the main story, the game has a couple of side quests and hardened bosses after the main quest is complete.

The story presents itself first with two characters, M01 and F01 fighting off virus like creatures in a strange environment. After defeating a virus core, the main events start to begin. Starter Favson awakes from a hundred year sleep in the middle of an abandoned factory, having no recollection of who he is, how long he's been asleep or why he's even here. Almost immediately he is greeted by his "anti viruses", Avatar Duo (M01 and F01), who let him know they have detected some issues with his system and are trying to take care of it. Starter aimlessly starts to explore the factory around him, while protecting himself from other creatures that dwell in the area.

Development of the game started around 2015, and had much more intensive development starting around 2018.