Portal Magic is a simplified term for powers involving transportation of living and non living creatures. Creatures in SP are able to transport things through known/explorable space and time, as well as dimensions or realities. This type of magic however is restricted to the Master Sync.

When choosing to go to a random dimension or reality, the results can be very strange and unpredictable, but portal magic has an instant failsafe to get the user back to their origin point if anything were to go wrong.

The most common way to use this power is by creating a temporary "sticker" like plane on a random space, including examples such as making a flat vertical oval in thin air, or a square on a surface, and so on. However a mass of this power can be sent at a target to send it into a desired or random destination, and the sender acquires information on the resulting vector/destination.

One of the most known uses is when unknown threatening creature (possibly corrupted) used it first to evade the Seven Servers. They were able to move to some unknown point of time to potentially plot an attack. Another known use is when Gontaper was demonstrating the potential of time skipping with the portal by appearing in multiple places at the same time, seemingly lumped together as one large body mass.

Using the portal magic has allowed SP creatures to discover:

Due to the fact that the time skip between portal uses can be infinitely small and SP creatures have the potential to be very fast, a very large amalgamation of a creature can be made by seemingly being in multiple places at once, making a new large general shape. It is extremely complicated, as the creature must re-render itself every unit of time and sync its movements as well. This can make them less vulnerable to getting hit as the opponent can pass through at a time where the creature is not rendered in the spot. 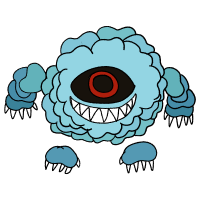