Kosmotvar is a Spirit that appeared in SP during the Kosmotvar Crisis in 2017. Due to a large problem in M.O.G.'s life back on Earth at the time, a physical manifestation of the problem formed in orbit of SP as a result of all the negativity surrounding the issue. Kosmotvar was created as a being of pure hatred and envy, causing his actions to be reasonless and chaotic. He wanted to destroy and consume everything around him to further fuel his energy.

When first sensing defeat, Kosmotvar hijacked the Cloud and used it to manipulate himself through time and space. He became the instance known as Chronotvar II, while he spread 5 instances of himself across the current time, and one in a past "alternate" timeline where he put Chronotvar I. All the instances were used to fuel each other with growing power, while Chronotvar I was a backup instance that brought fuel from a safe point in a fabricated time coordinate. The five non-chrono instances are space, cage, red/krasno, virus, and dream.

Kosmotvar was ultimately defeated when M.O.G. destroyed all the non-chrono instances, Guppy destroyed Chronotvar I and his fabricated timeline, and Gontaper helped M.O.G. defeat Chronotvar II. The Seven Chronos were created partially with his remains, which were strange cores cleansed of any negative energy.

Kosmotvar is a considerably large entity with seemingly no solid "center". He constantly wears the Mask of Malevolent Time, with yellow and bright orange spiky hair poking out from above and around. However behind the mask there seems to be only darkness and two bright blue eye like lights. Going down from the mask, a skin like layer with very visible artery like red engravings trying to form an upper torso with arms. The chest is covered by a strange dark teal cloak with large light skin color wings popping out from the back, with the backside of the wings being light teal. Fleshy red tentacles appear from beneath the cloak with a green tail poking out. The tail has red spikes on it, as well as spikes protruding from the cloak where the arms are. 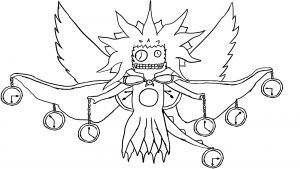 The Chronotvar instances have slightly different appearances. Both of them retain the hair, wings, tentacles and tail, but now the cloak is changed for a cape separated in two with different clocks hanging from it, and two big clocks behind his back. A fleshy red chest is now revealed with a huge core in the middle, and a darker-red/black face reveals clocks instead of eyes and a set of beastly teeth.