Hungry Hungry Solies is a small joke application hidden inside MEOS. In the game you control Sol Favson who is seen flying through space, and you must eat planets, galaxies and entities to grow bigger. The longer you wait however the more you shrink, and past a certain point it's game over. The game has a total of three levels, wherein progress is determined by reaching a certain size.

This game was made as one of many files to be hidden in the File Surfer in ME-OS. It released on January 18th 2022 as part of update 0.0.49. Development took around a day. 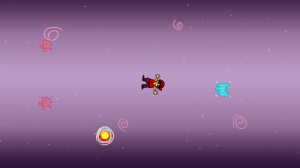 Screenshot of gameplay in the second level
Retrieved from "https://www.worldofsp.com/wiki/index.php?title=Hungry_Hungry_Solies&oldid=2258"
Category: