Gonkoshlex is a P.O.D. of Gontaper. He is very fluffy with smooth red fur, big orange face and two yellow puffy tails. He also has a mech he often uses called Kosh-mech. Gonkoshlex very chaotic and playful. He loves to play with the pyrotechnic toys his wife Alaper makes him. He lives in Hex City at house #46 with Alaper which allows him to meet up with a lot of his friends in the park at night.

Gonkoshlex is warm and fluffy, with red fur. He has two ears, a bushy orange moustache and sharp claws coming out from his detached hands and feet. He is hollow inside, as the space inside of him is infinite (with his heart in the middle). His mouth, nose, ears and eyes send all senses to the heart. Like any other creature in SP, his heart makes him immortal and he can also morph into anything he wants, however the default shape is the one he is seen in 99% of the time. 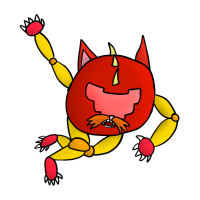