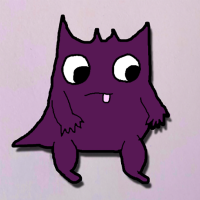 An old image of Corren in his default form

Corren is an ex antagonist who now peacefully resides in SP. He's short, purple, and round. He was once used as a decoy by Opoctus which started the Corruption Crisis.

Due to how much he loves the sky, Corren lives in Nebess Peak with his wife Yarehshi. However he is very often found in Hex City as well where he has his second home, roaming around and making conversation.

Corren is generally very curious and has lots of questions about how things work. Compared to how he originally appeared when corrupt, he seems to be very light hearted in nature and enjoys watching the sky. He will often observe the night sky with his wife while falling asleep on the clouds.

Corren is a bipedal creature that has two ear/horn looking spikes on top of his head, along with two smaller spikes in the middle. He has stubby little arms and legs with 5 digits each, along with a tail that blends with his torso. Even though he does not have a nose or ears, he can still hear and smell with psychic abilities. Like any other creature in SP, his heart makes him immortal and he can also morph into anything he wants, however the default shape is the one he is seen in 99% of the time.

When in corrupt form, he retains similar body shape except it gets slightly bigger. The legs disappear and the hands become large but detached, no longer needing arms. He also has 8 red shard eyes, with one of them being big and in the middle. His mouth also becomes nightmarish and infinitely deep, seemingly going into no where and sucking things in.

Like any creature in SP, Corren has the option to use any ability or power. However, as a preference, he likes using mirror magic and cold, dark energy. When fighting, he often goes into his corrupt mode (even after the purification, as purified creatures can go into any form and remain non-malicious) and blasting away with energy or trapping his opponents in the Mirror Dimension.

Corren has many different forms that each have a specific role to execute a certain action.

Corren is fascinated by flowers, so he likes to plant them all over SP. He thinks it will remind everyone to stay at their happiest and also enjoy the landscapes.